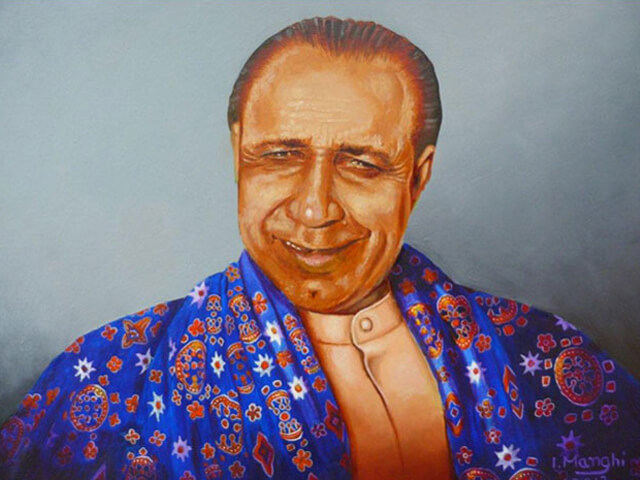 Our trust is named in memory of Late Mr Ali Hasan Mangi, for whom poverty and deprivation were deeply personal. He was born in 1913 to Muhammad Ibrahim Mangi in Rato Dero, a small town near the city of Larkana in Pakistan’s southern province of Sindh. Orphaned at the age of five, he was taken to the village of Khairo Dero by his maternal grandmother where he was cared for by extended family. He struggled to get an education amid poverty; acutely conscious of the responsibility he bore to his three younger siblings. He once even bandaged his feet and pretended to be injured and unable to wear shoes because he couldn’t afford them and didn’t want to be scolded by his teacher for coming to school barefoot. He matriculated from Bombay University and was appointed as a teacher at a government school.

In those early days on the job, he was known for giving away his meager salary to students who couldn’t afford books or clothes. When he was promoted to become inspector of schools and traveled outside his immediate neighborhood for the first time, he was strongly affected by the widespread despair among the poor.

He then worked several different postings in the cities of Larkana, Sukkur, Rohri, Jacobabad and Shikarpur.

As Ration Inspector he also came into contact with the trading community for the first time. In his early thirties he realized that no matter how hard he worked at jobs, he would never make enough to help all the poor around him. So he set his sights high.

He started by opening a small Public Complaint Office where ordinary citizens could bring their problems. This helped him become well acquainted with people, their needs and aspirations. During the partition of the Indian subcontinent in 1947, he set up a refugee camp in Sukkur’s famous Lucas Park, providing immigrants with food, shelter and clothing. Later, a colony for immigrants in Old Sukkur was named “Mangi Colony” in acknowledgement of his contribution.

Eventually, he got into business, opening factories making wool, silk, hardware, fans and carpets. He started the first transport company in Sindh, a bank, and got into ship-breaking and commodities’ exports. That way, he was able to give jobs to thousands of the poor and needy.

He also gave scores of students scholarships, had countless ill people treated and ran the monthly household budgets for an uncountable number of families.

He then went on to enter politics; and those very people elected him to Parliament time and again for over forty years. That way he was able to influence policy and ensure people got basics such as electricity, gas and roads. He moved the resolution in Parliament for the formation of the Sindh Regiment in the Pakistan Army.

When he moved to Karachi in the sixties, he allocated rooms in his house for travelers who would come seeking his help. He always ensured they were fed, had a warm place to sleep and fare to travel back home after their problems were sorted out.

Ali Hasan Mangi passed away in 1994. He was a quiet, reflective man with the most uncommon capacity to give, the greatest reservoirs of patience and fortitude, and the most compelling urge to uplift his people. Throughout his life, he wore the simplest of clothes and enjoyed the most frugal meals–seeking satisfaction always in giving what he earned to the downtrodden.

To this day, years after his passing, people remember him for his kindness and generosity; as a true friend to the poor. The Ali Hasan Mangi Memorial Trust aspires to take his mission forward, working toward the development and uplift of the poor. This is our hope and our tribute to his most loving memory.